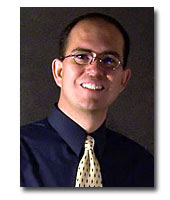 Day ten on the "Praise Others Project" brings us to Jason Alba of Jibber Jobber. Jason is an active blogger, but has also created a great toolset for the job searcher.

JibberJobber was designed by Jason Alba during his first real job search beginning January 2006. After having a successful career in IT and business strategy, Jason found himself in the job market, which was supposedly a "job seeker's market."

Jason quickly found that a job seeker's market does not mean the job search will be easy or short. Frustrated by the lack of real tools for job seekers, he decided to move forward on a tool that allowed a job seeker to manage and organize a job search.

As the months passed, and as Jason learned the importance of networking, he incorporated a major networking piece into JibberJobber. This has shifted its focus from a tool just to be used during one job search into a tool to be used to manage job transitions during your entire career.

I met Jason when he volunteered to host "The Networking Carnival" in November 2007. He not only accepted a submissions, but he actively went out an solicited some of his favorite business bloggers (including Seth Godin, the grand-daddy of cult-like bloggers) to give him posts on "networking tips for job hunters". I was impressed by Jason's tenacity and his real empathy for those who are looking for work.

Posted by thomsinger at 5:36 AM

Email ThisBlogThis!Share to TwitterShare to FacebookShare to Pinterest
Labels: Praise Others Project

I'm familiar with Jason's Web property, JibberJobber.com. As a veteran headhunter and fellow entrepreneur in the employment space - JibberJobber was well conceived, and has considerable promise. Great post.

I think the most significant thing that JibberJobber has been able to do is empower people to help them take control of their career management - incorporating the basics of networking and job search smarts.

Its been an honor to be a part of it, and I appreciate the recognition/praise from you, as a master networker and one who has "written the book" on networking.