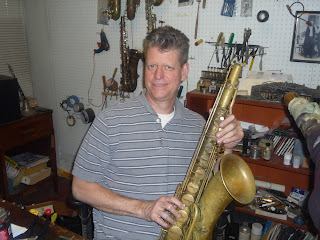 My brother, Bill Singer, is New York City's premier "Saxophone Repairman". While I was in New York for business I dropped in on his studio. It was great to watch him at work. 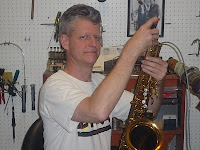 He was with a customer who had recently purchased a new horn and Bill was checking out the instrument and providing a tune up. It was great to watch him work with the saxophone (he is a real craftsman), but also to see his extremely high level of customer service. He talked and laughed with the musician as he fine-tuned the sax. 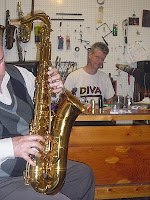 His client told me that "Bill is the best in the business". This was not just a nice comment he made... he meant it. One could tell that Bill cared a lot about the horn and the person who played it.

I am a big fan of "niche businesses", and.... "Saxophone Repairman" is both a specialized niche and a unique career!

PS - After writing the above post about my brother, I discovered this video on YouTube that was filmed by one of Bill's other happy customers:

Posted by thomsinger at 5:00 AM