Facebook Is A Tool (But How Long Until It Is Yesterday's News?) 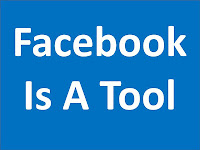 Mark Zuckerberg and others with stock options certainly had a life changing event, but overall nothing changed for most of the world. Yes, his company has had a huge impact over the past few years, but where will it find itself in when this week is in the history books?

In our social media crazy world the tools are changing all the time.  Today Facebook is on top, but will they remain a leader or will some other entrepreneurs come up with a new-new thing that will make us forget Facebook?  When Netscape went public in 1995 it set off the boom that changed Silicon Valley and made the internet a household utility, but it did not last forever (not long at all in the big picture).

Our society loves social media tools, and Facebook is one of the leaders.  But social media does not replace or recreate human-to-human relationships.  It is simply a tool.  New tools are always being created and those that make it big eventually become common place or are replaced.  It was only 110 years ago (barely more than a single lifetime) man learned to fly.  Now we hardly see airplanes as revolutionary technology.  I was on four planes this week alone.  Before airplanes we took trains.  I have not been on a train since I was a kid.

People need people, not digital links.  While we are spending a lot of time lusting after the newest apps, there are people around us who could bring real opportunities.  But we ignore them and instead check Facebook on our smartphone.  This is true everywhere that people gather.  The "Phone Zombies" walk the streets, offices and convention hallways oblivious to what could come from face-to-face conversations.  We are so into what is happening somewhere else, we do now pay attention to what is happening around us.

I predict that some enterprising Generation Y entrepreneur will create a movement toward noticing the people who are in the same room.  We call it "networking" or "connecting" in today's language, but this guru of human interaction will give it a new name and the masses will embrace it as if meaningful conversations were revolutionary.  The pendulum will swing back and we will once again have discussions that do not use digital tools.

This does not mean we will discard social media.  It will simply take its place as a tool we use to advance relationships.

People matter, and we can link to strangers all day long,.... but it is those with whom we really create mutually beneficial and long term personal relationships that we will remember on our deathbed.  I do not imagine anyone reaching the end of their life asking to to scroll their Facebook status update stream one more time.

What do you think?

Have a great day.