Fame Comes Fast to Janis Krums - But Then What?

Janis Krums (aka @jkrums on Twitter) is a young guy. Entrepreneur. Former Athlete. Student of life. He is searching for the Next Big Thing in his life.

But one can never predict when or where that big thing will appear. As I said in a post the other day - you cannot force viral! Viral just happens.

On January 10th Janis wrote five goals for the year on his blog. Number five was "to have over 1000 followers on Twitter". The purpose of this goal was unclear, just something he wanted to help him market his personal brand as he grows his career. It followed the other goals for 2009 which included learning to sail, hitting his sales goals (not sure what he does), losing 15-20 pounds, and writing 100 blog posts (to improve his writing skills). 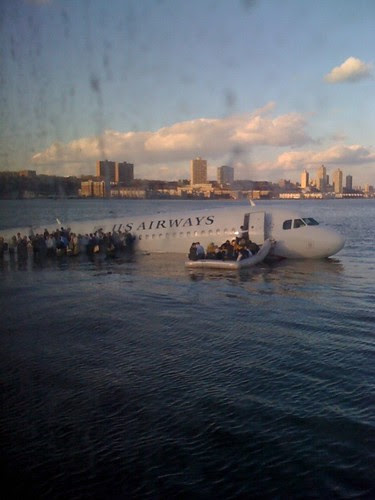 crashed into the Hudson River. The ferry went to the scene to rescue the passengers. Janis took a photo with his iPhone and uploaded it to the internet and linked the picture to Twitter.

WAMMO. The picture was quickly seen round the world as it was "re-Tweeted" by people on Twitter and was then picked up by traditional news sights, bloggers, etc.....

Janis instantly was someone people knew about and were looking to learn more. Within a few hours he had gone from a couple of hundred followers on Twitter to well over 2000 and growing. Local and national TV news stations were calling his iPhone and sending him Twitter and email messages hoping to interview him.

He was instantly part of the Twitterati - the whose who of those who tweet. But had said nothing new on Twitter in hours. The audience came and Janis was quiet. Hmmmmm.

Now, all this took place just a few hours ago. What happens to Janis next? He still needs to take up sailing, write 97 more blogs (although he certainly has some stuff to write about after his busy day today!), sell some product, and lose 20 pounds to meet his goals for the year.

Will his 15 minutes of fame help him in any way with his entrepreneurial endeavors? Hard to tell.

PS- He seems like a cool kid. The kinda guy you might want to have a beer with at a tech conference. This is part of my criteria for following folks on Twitter (but not my criteria for how I vote for politicians!!!). I now follow him and will be interested to see if he has anything interesting to say after today.

UPDATE 1/16/09 - 6 AM- I see from his two Twitter comments since the photo that he has been on MSNBC and Good Morning America, and more.

When you google his name you get 1500 pages, most of which are related to his TwitPic photo.

Posted by thomsinger at 5:15 PM

cool write up about Janis, he was lucky to be there and witness first hand a part of history in the making!

The twinterview with Janis Krums is now on my blog. All questions came from the twittersphere. They cover everything you could want to know...the crash, the photo, copyright issues, capt sully, relationship status and more!