BE SOCIAL - Talk To People 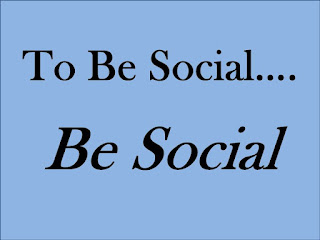 We are obsessed with "social"... but people are being less social in their in-person actions.  You can hardly attend an association or business conference that does not have a track of breakout sessions focused on "Social"... but then you go into the hallways and the attendees are ignoring those around them.

Everyone is buried on their phones trying to keep up on what is going on someplace far away.  They stand around and avoid eye contact with those around them.  We are hungry to connect, but we are not taking actions to engage with other people.

This SXSW Film Festival promo clip makes me laugh (see below or at this link:  http://www.youtube.com/watch?v=Ml0Vn56lBwo).

The couple meet in line while waiting for film.  The are not on their phones, they actually talk.  They hit it off.  Their lives flash forward to marriage, kids, etc...  But the guy is in the wrong line.

Even if you are in the wrong place, strike up a conversation.  You never know what it could lead to.  All opportunities come from people.

If you are at a conference and you are spending your breaks with co-workers or surfing the web on your phone... you have flushed opportunity down the toilet.  If you are waiting in line, turn to someone and say "hello".

I have heard that at the 2013 SXSW Film Festival they are going to sponsor "Line Meet Ups"... a semi-organized effort to get people waiting for a film to network and have fun with each other.  Going beyond a line of hundreds who are reading Facebook and Twitter posts, a "Line Meet Up" could be a spontaneous party on a side walk.  Think about the possibilities.