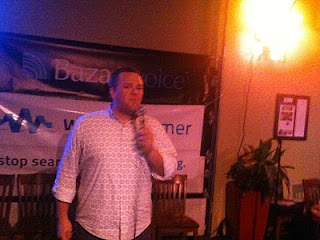 A huge turn out of people, Mexican Martinis, karaoke, fajitas, friends and fun ruled the night. Much of Austin's "Social Media Community" were present to celebrate, and it was great to meet many local people who I have only known via Twitter (and other online venues). In person conversations always are better than virtual verbiage.

Scott "Social Media is My Middle Name" Allen kicked off the singing, and was followed by many others who had their three minutes of American Idol style fame that was broadcast live over the internet. My friend Mat Harris, Founder and CEO of Biz Greet, belted out a rendition of "Friends In Low Places" that would have made Garth Brooks proud (captured in the photo at the top of this blog post). Meanwhile, I avoided singing altogether (I am a "singer" in last name only)...you're welcome!

Matt Curtin, Founder and CEO of SocialSmack, also sang karaoke, but thankfully I missed his Beastie Boys beat. Apparently we all must "Fight For Our Right To Party!". Additionally, Mr Curtin had a giant stack of stickers that announced the launch of SocialSmack, which he pasted all over the shirts of the party-goers! Hey, I am a fan of marketing your goods, so more power to Matt!

Every time the Mashable comes to Austin a great party is the result (although I did not actually see anyone from Mashable present at the party). Thanks to everyone who worked to produce the event, and those who participated:

The sponsors and those who made the event possible: Austin American Statesman, Mashable, Bazaarvoice, Workstreamer, The Cedar Door and Pinqued (Jen and Kate from Pinqued did a great job, and there were very "Pink"--- shirts, hair, shoes, etc....).

thom
Posted by thomsinger at 12:07 AM