Networking Mistakes Being Made At Almost Every Conference 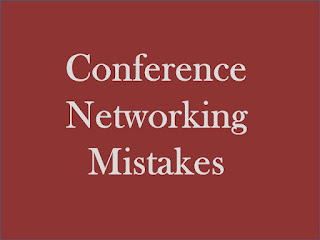 Mistakes are made at events.  People say they come for the "networking opportunities"... but then they often fail to make meaningful connections.  Planners know that this is an issue and are always seeking ways to help attendees do a better job of meeting each other.  It is well known that the agenda matters and data is important... but when people have great "hallway conversations" with their peers, the event is a bigger success.  Thus getting people together means exceptional events.

Here are the most common mistakes people make when networking


1. Spending too much time with coworkers and other friends. Cliques are a big problem at events, even though people do not intend to be exclusive. It is easy to gravitate to those we already know and close ourselves off from the opportunity to meet new people. If this goes unchecked, it can undermine the whole atmosphere.

To combat this you must be conscious of the need to get people engaged.  Since people attend a conference, trade show, convention, seminar or other events for the "networking opportunities", there must be an environment where the people are the stars of the show.  Too often we see events that claim "content is king", and while learning is important, it does not trump the human experience.

2. Seeking time with celebrity speakers, industry gurus and other VIPs. Many people have a hope that they will meet someone more established (or famous) who will reach out and pull them up to the top. While this could happen, the reality is that most of these VIPs are not at the event hoping to discover a protege.  They are polite and happy to talk with those who stand in line to meet them, but few go home and follow up with those they encountered.  But when industry gurus or celebrities are highlighted as the focal point of the whole event, it is not surprising attendees flock to them.

A better idea is to get people to spend time with peers. Discovering others who are at similar career levels is an invest in establishing the foundation to what can grow into a meaningful and mutually beneficial friendships.  Conferences need to champion the power of the audience over their agenda and their celebrity speakers.

3. Talking too much. People often think that they should impress those they meet at conferences.  Hours are spent trying to craft a catchy "elevator pitch" and agendas include "speed networking" programs that turn the process of meeting into a fast-talking parlor game.  Instead of trying to be interesting, attendees should be interested in others and what they have to say.

Forget the goofy ice-breaker games and instead educate people to ask the types of questions that will launch meaningful conversations. The more one inquires about others, the better impression made. Talking too much about yourself will turn many people off (I struggle with this and am working to improve).

4. Paying attention to electronics. Smartphones and other gadgets are wonderful tools to make our lives more efficient, but at a conference they can be the wall that blocks interesting chats. If someone is on their phone they cannot be engaged with others and do not look approachable. Yet telling people to put their phones away will create a problem, as that is just not going to happen for many.

When a face is buried in a phone it tells others that the really fascinating people are elsewhere and that the offender is choosing email, text and social media over talking with them.  Creating a place where people want to have live conversations is always a challenge, but it can happen if the planners are intentional in their efforts.

5. Skipping keynotes and other sessions. People are experiential beings. When at an event there must be participation if an attendee wants to be part of the "mini-society" that is created at a conference.  There are communal activities that are expected for admittance into the group.  Yet too many people scour the schedule for when they can retreat.

Being present and active in all aspects of the conference must be part of the culture.  Creating an expectation for involved behavior throughout the event must be established. Building downtime into the agenda so that people do not feel overwhelmed is an important step to keep them from running away from the main events.

6. Expecting a short conversation to make someone part of a network. It can take several meaningful interaction with people before someone notices another exists. It is not uncommon for people to not grasp what another person does for a living until they heard it several times. Thus one meeting is not usually significant to create a relationship.  Yet people think a brief encounter makes them lifelong friends and are convinced they have established something meaningful.

Encourage your attendees to follow up with those they meet after the conference.  Do not let the power of connection created at your event die as soon as people leave for the airport.  Online communities and other forms of follow up should encourage people to extend their conversations once they get home.

7. Arriving late, leaving early, or skipping the networking time altogether. The best networking takes place before and after the main programs. Too often people will show up for the education but not the networking, and then wonder why they did not meet anyone who could have an impact on their future.

Being present at the networking events with a purposeful intention to meet others and discover what they are all about is the only way people will have success. Creating events that are uniquely interesting is important.  Simply coming to a ballroom for cheese and wine is hardly appealing to those who attend a lot of events.  The more inviting the social activity, the more likely people are to show up.

The best way to create an atmosphere for better networking is to make it a priority.  Do not pretend it is not important or that the human experience is secondary to the rest of the agenda.  Recognize that people want to connect, but that they will always suck at it when left to their own devices.  Address the elephant in the room and give your attendees the permission to network (it is what they want to do!!!)

Thom Singer is known as "The Conference Catalyst". He works with meeting planners and conference organizers to set the tone for a meeting. His presentations educate, inspire and motivate attendees to engage deeper in the event and make meaningful connections.  http://www.conferencecatalyst.com

Posted by thomsinger at 6:20 PM

Email ThisBlogThis!Share to TwitterShare to FacebookShare to Pinterest
Labels: networking

Great advice, clear and simple. Thanks!

I'm all in when it comes to stirring up more hallway conversations -- those are often my favorite moments at an industry event.

PCMA has set the stage for an incredible experience, but it's up to us (as attendees) to step up and make the most of this opportunity. I shared an idea today on one way to make it happen: http://bit.ly/13kjbGz

Sometimes we all just need a reminder!

I would add one thing: many times during events a random man likes a random woman, and they look for a way to meet each other (or at least hit on each other) during the meeting. You cannot really prevent that from happening, but it's just a reminder that those things also happen... often.