"Nice Speech" Could Be "Polite Speak" - Did You Really Do A Good Job? 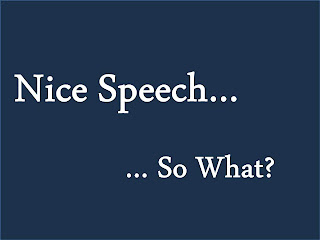 Executives that stink at public speaking often do not know they stink..... Because nobody ever tells them.  In fact, they are encouraged to keep coming up short when they take the stage.

What do you say to a speaker after a great presentation?

What do you say to a speaker after an average speech that was on the edge of blah?

We live in a mostly polite society, so the feedback a speaker hears from an audience can be deceiving.  "Polite Speak" could just be idol chit-chat, but too many professionals are taking this to heart and self-deciding they are above average speakers.   Many business executives who have to give a speech at a luncheon or conference have never given much thought to their speaking ability.  Many have had no training since their 8th grade book reports, but since they are an industry expert they feel confident (or cocky) enough to "wing it".

The people who come to events deserve better than unprepared off-the-cuff remarks.  But most business speakers are sure they are doing a great job because they are hearing what they think is positive feedback.

Several years ago a mentor of mine, Jim Pancero, asked the question "What do you want people to say to you after a presentation?".  Most speakers answer that they want the meeting planner and the audience to say "good job".  But this is what everyone says, even when the speaker was dull.

The response you want to hear, according to Jim, was "What else can you do for me?"  Nice speech does NOT translate to "I want to hire you or refer you to others".  I have learned to not put too much stock in the onsite praise, but to review the new business that spins off from a presentation (even months or years later).  Since my speaking opportunities almost always come from word-of-mouth... this is the most important data point for my business!

I can be critical of those I watch speak at conferences.  Having seen thousands of presentation I have a good eye for how an audience is reacting to a speaker.  Too many speakers are business professionals who are there to sell their services to an audience and are not present to serve the audience.  Some are so cocky they have no idea how many times they mentioned their own MBA degree during their remarks.  Others are happy to meet the low expectations and are not concerned with raising the bar to a higher level as long as they do not forget their place in the middle of the talk.

Next time you present to a business audience be suspect of the "Nice Speech" feedback.  Instead, look deeper for ways to enhance your public speaking skills.  Learn from every talk.  Challenge yourself and your audience to have greater expectations from your interaction as a speaker and an audience.

Posted by thomsinger at 9:21 AM

Email ThisBlogThis!Share to TwitterShare to FacebookShare to Pinterest
Labels: speaking, The ABCs of Public Speaking