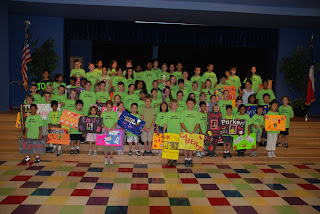 Clayton Elementary School in Austin, Texas took home the honor of being the first Texas school to win the National Math Pentathlon competition.
The two year old school only opened its doors in the fall of 2006, but has attracted some of the best teachers and administrators in the Austin Independent School District. My 5th grade daughter

was part of the winning math team that brought home the trophy, and today the surprise news was unveiled to the students at an assembly where they were joined by parents and a local news crew. Click Here to see the video on News 8 Austin.
Such things as "math teams" did not exist when I was in school (or at least I never heard of them). This program is great as it promotes those who excel in the classroom and not just those that succeed in sports. The over 80 kids spent most of the school year learning the games and practicing their math skills. It was both fun and educational.
The Mathematics Pentathlon is a program of interactive problem-solving games, supportive curricular and instructional activities, and assessment tools for ALL students in grades K-7. This motivational program strengthens basic math concepts and skills, aligns with National and State Mathematics Standards, and stimulates creative thinking while developing problem-solving skills.
Have A Great Day.
thom

Posted by thomsinger at 8:09 PM

Woo-hoo! Good for them!

Looks like LOTS of girls in on the program, too. So DOUBLE woo-hoo!!