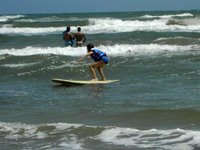 There is something amazing about watching your nine-year-old daughter learn to surf. Although I was raised in Southern California, surfing was not something I ever attempted. I was just not that cool.

This weekend while my family was vacationing along the Texas coast, my friend Ed taught Jackie to surf. She is now officially much cooler than I was at nine-years-old. Maybe than I am at forty.

The surfing lessons were spread out over two days, but by the second day she was riding the waves. She started by laying on the board and cruising to shore. Next on her knees. Before long she was standing. Sure she fell a few times, but she kept going back out and trying again. She kept trying.

At day's end everyone could tell that Jackie had a true sense of accomplishment. She had been scared at first, but tried surfing anyway. She met those waves head on and had triumphed.

Kids are much better than grown-ups when it comes to tackling new things. We could all learn a little about overcoming our limitations from the newest surfer in Port Aransas, Texas. Good job, Jax. (yes, that is really Jackie in the photo above!!!)