She Is My Hero 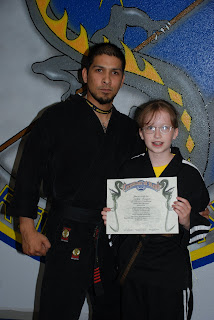 My ten-year-old daughter began martial arts training three years ago. She was shy, small and not the type of kid one might expect to be in a karate program. But she enjoyed the classes and was naturally good at the discipline of the forms and weapons. The hand-to-hand fighting was never her favorite, but she realized that sparring was part of the program, and thus has stuck with learning to punch, kick, hit, grapple and defend herself.
Friday night at her dojo's graduation ceremony she received the rank of "Black Belt Recommended". In three months she will undergo another four to six hour exam to become a black belt.

This has not always been easy for her, or for me. It is not fun to watch your sweet kid taking a hard kick to the face from a twelve year old boy who should have pulled back. When something like this happens she has to struggle to fight back the tears while I have to sit on the sidelines and not run to comfort her.
She trains three or four days a week, with some additional time at home spent memorizing moves and weapon routines as a new test date approaches. But like every task she encounters, she does it with determination. Sure, she is a ten-year-old girl who gets frustrated when it gets difficult, but in the end she has an admirable steadfast quality that drives her to keep trying.

I admire her focus. I did not have this at her age. She has had it all along.

I have no idea what her future will hold, but if she can maintain her high level determination and love of learning, she can do anything.
Have A Great Day.

How I wish I had her focus as well -- not sure I have it even today. Thanks for sharing her experience with karate.

I think what she's done is downright amazing. Hats off to her for what she has accomplished and the strong woman she will become for doing so!

Congratulations to her--that's a lot of discipline and determination. I'm sure it will stand her in good stead whatever she chooses to do.

Way to Go Jackie! I am proud of you.